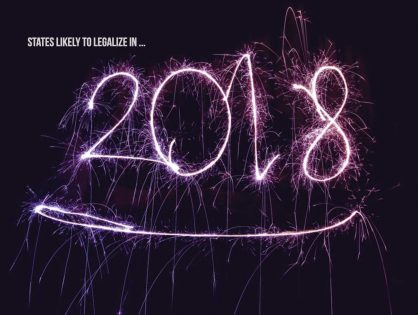 With all the drama that happened in 2017, you might not even have noticed that there wasn’t a lot happening in terms of new states legalizing cannabis.

Well, we aren’t exen 2 weeks into 2018, and it’s already shaping up to be a huge year for cannabis.

States Likely Moving to Recreational / Adult Use in 2018*

States Likely Moving to Medical Use in 2018*

At this point, Vermont is as good as legal. Both the House and Senate have already passed a bill to legalize recreational use of cannabis, and Gov. Phil Scott has already promised to sign it.

So congrats to Vermont! If you state is still white on the map above, make sure to contact your state representatives and let them know how you feel about cannabis.